Yesterday I had BAD news to share about “Red Flag Gun Seizure” laws being pushed in Congress by everyone from Nancy Pelosi to Lindsey Graham to President Trump. But today we have an absolute gun control emergency right here in Wisconsin! That’s because anti-gun Governor Tony Evers put out the call, demanding a SPECIAL SESSION for the sole purpose of passing his radical gun control agenda. This demand comes on

It was hard to watch. In case you missed it, at a press conference earlier this morning, President Trump announced his full support for ‘Red Flag Gun Seizure’ legislation in the wake of the Texas and Ohio shootings that took place last weekend. This is the very same legislation being pushed by the radical left and weak-kneed moderates in Washington D.C. and state legislatures all over the country! And unless

By now you’ve likely heard about the special deal we are running for the month of July. In celebration of the 4th of July — and the freedoms that we enjoy as Americans – the Wisconsin Firearms Coalition has put together a special offer for all new or renewed memberships during the month of July! More about that in a moment. First, I wanted to take a moment to let you

“I NEED one of those shirts, my friend just got one in the mail yesterday and said it’s the most comfortable shirt he’s ever had. Send me one!” So said WIFC’s newest member when he called our office yesterday looking to pick up his FREE WIFC T-Shirt and decal. In case you forgot, in celebration of Independence Day and our freedoms as American citizens, for the entire month of July

Happy Independence Day from the board of directors of the Wisconsin Firearms Coalition! On this day, 243 years ago, our nation adopted its Declaration of Independence, telling England that we would be a sovereign nation forever more. During the run-up to the 4th of July, private individuals and loose affiliations of people began to purchase and store weapons fearing all-out war with England. Hearing that everyday men and women were

“It is foolish and wrong to mourn the men who died. Rather we should thank God that such men lived.” — America’s Fightingest General, General George S. Patton, Jr From the board of the Wisconsin Firearms Coalition, I hope you enjoy your Memorial Day weekend, but I hope you’ll pause for a moment, too. As we honor the memory of those who have given their lives to purchase and then 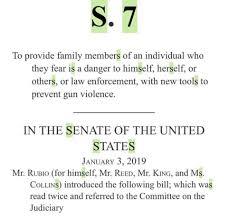 As we work around the clock trying to STOP any momentum for Red Flag Gun Seizures in Wisconsin, we are also paying close attention to the war against gun owners going on in Washington, D.C. That’s why I’m writing you today, as it appears likely that Congress will be voting on H.R. 8 this week! H.R. 8 is being sold to gun owners as an innocent ‘Universal Background Check bill’

State Capitol insiders report to me that in the coming weeks, anti-gun radicals will introduce dangerous ‘Red Flag Gun Seizure’ legislation here in Wisconsin. ‘Red Flag Gun Seizure’ legislation would allow judges to order your firearms seized before you have been charged, indicted, or convicted of ANYTHING! The complaint can come from an angry neighbor, an embittered ex-spouse, a former boyfriend / girlfriend, and more. And the hearing to determine

Nancy Pelosi is working around the clock to deal a kill shot to our gun rights as she works to pass H.R. 8. This bill would create what the gun-grabbers have always wanted: a national database of every gun and gun owner in the country! This bill already has a whopping 229 cosponsors, more than the number of votes needed to pass this bill. But cosponsoring a bill and voting